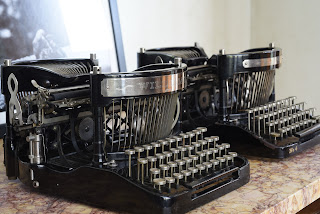 I guess I would consider this an extended version of the Williams article, focused on two repair jobs for the Model 4.  My lack of organizational skills have decreed "continuity begone."  Try not to hold it against me despite it being entirely my fault.  A few things may repeat, but largely this should focus on the 4, rather than the company history which I shall link here. 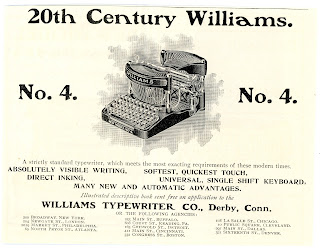 An original advertisement scan
The Model 4 was introduced in 1900, and advertised with the most beautiful of sales manuals.  Red leatherette, lettered in gold leaf, and it outline some of the massive mechanical improvements undertaken to make this machine that much better than the Models 1 through 3.  While the most obvious changes occurred to the keyboard, opting for four banks rather than three, the most user noticable change was to the carriage and escapement.  The new model 4 featured a direct geared mainspring, a rotary escapement, and a much improved line space mechanism.  This allowed for straight lines, accurate letter spacing, smoother return, and better line indexing.  The only two faults were the lack of backspace, and the tendency for the ink to corrode the type slugs.  Other than that, this was one SERIOUSLY refined typewriter.  In the next couple years, the early model underwent minor fine tuning, notably the quick release lever for the platen was turned into a leaver rather than a finicky push latch. 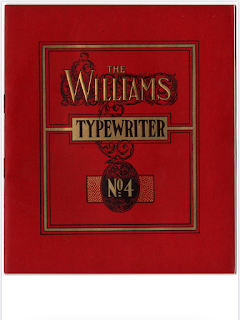 This past month has lead to me getting my hands on two of these amazing writing machines.  One was a client repair job for a 1901 Model 4, in near flawless cosmetic condition.  However after some extensive work, it became apparent that the type had eroded so severely that the machine would mostly print rectangles.  The 1905 Model I acquired in a trade was in less nice of a shape, but was also less eroded.  It printed fair, but nothing in comparison to Shaan's Model 4 which he posted a photo of to facebook.  For comparison, I have included an original type sample as well as the sample page I typed up in my recent youtube video on the 1905. 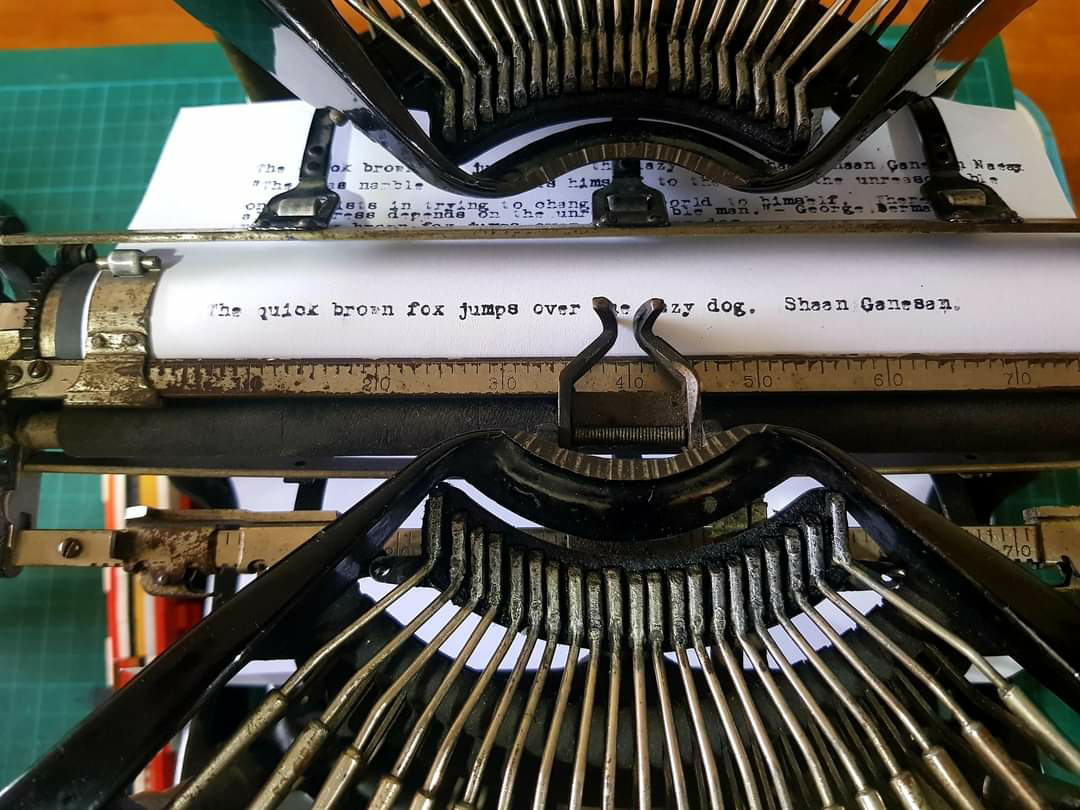 That is very nice 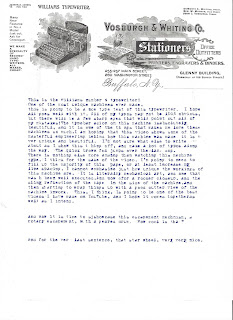 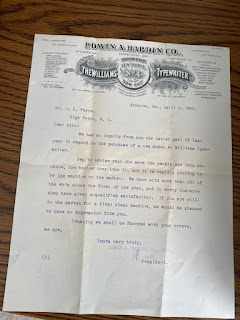 Original type sample
So starting with some poorly documented info on the 1901 model, it came to me missing ink and a knob, but in otherwise good shape.  It also happened to have a frame crack on the underside due to a poorly designed front right foot.  I stripped off the only three panels that come off (front, rear, and nameplate) and polished it all up.  It got a brand new platen and feed roller from JJ short, with the knob being resin printed to near perfect specs (including the odd 31 bumps along the outer edge).  The ink pads were standard fabric covered stamp pads from the local office store, inked with a water based ink.  It worked wonders on the model 1. 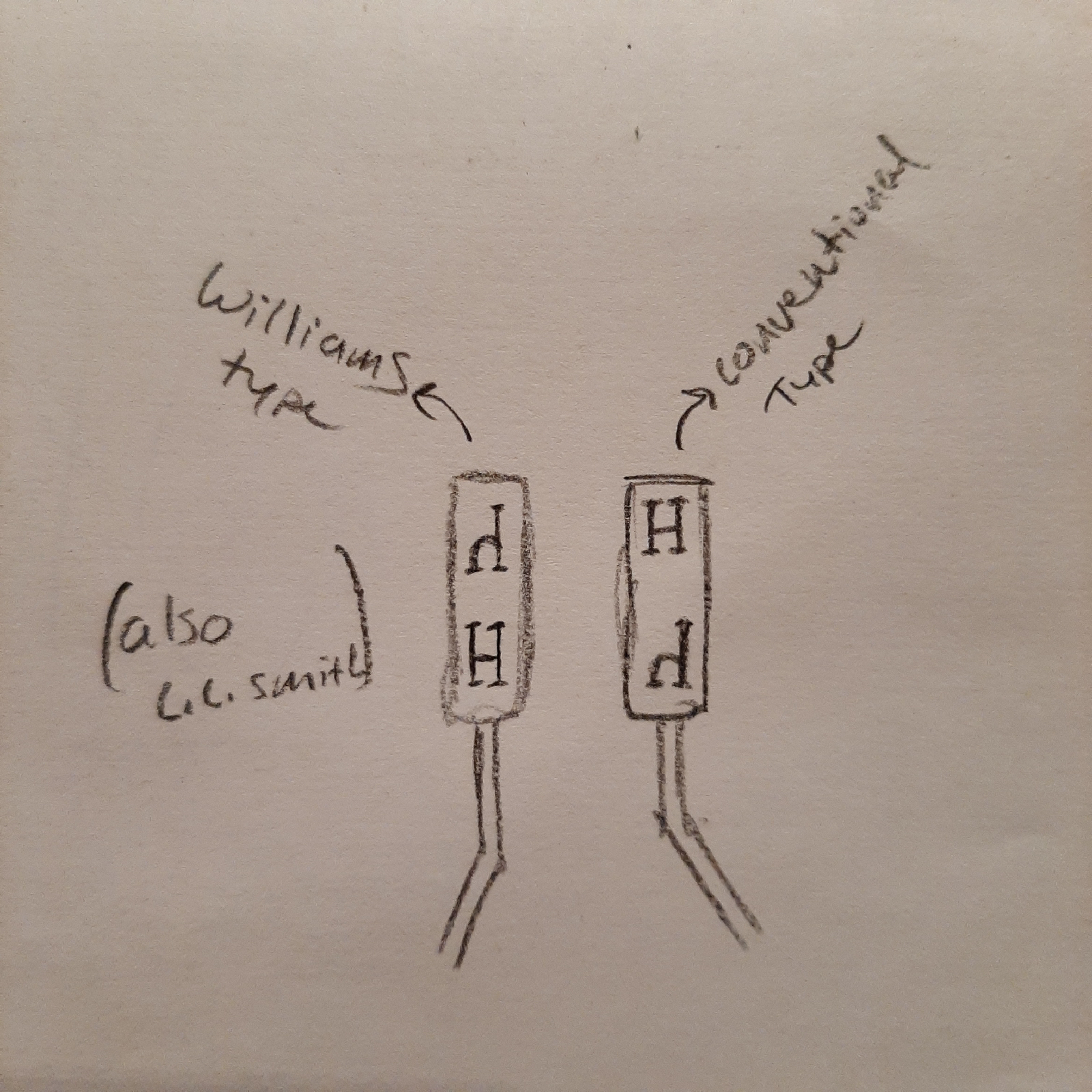 Considered a type slug swap!!  Would be a lot of work 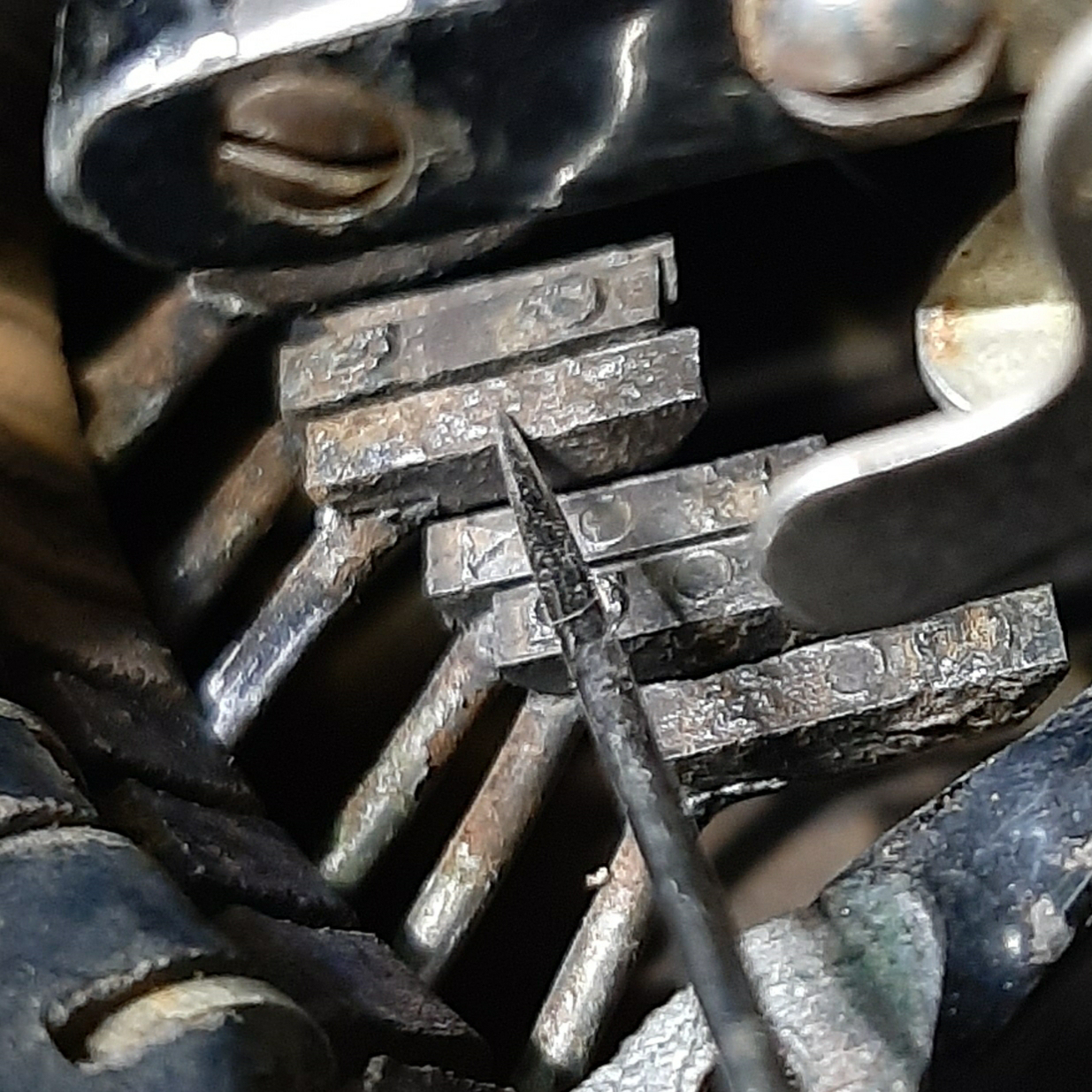 Here you can see the D slug is worn smooth 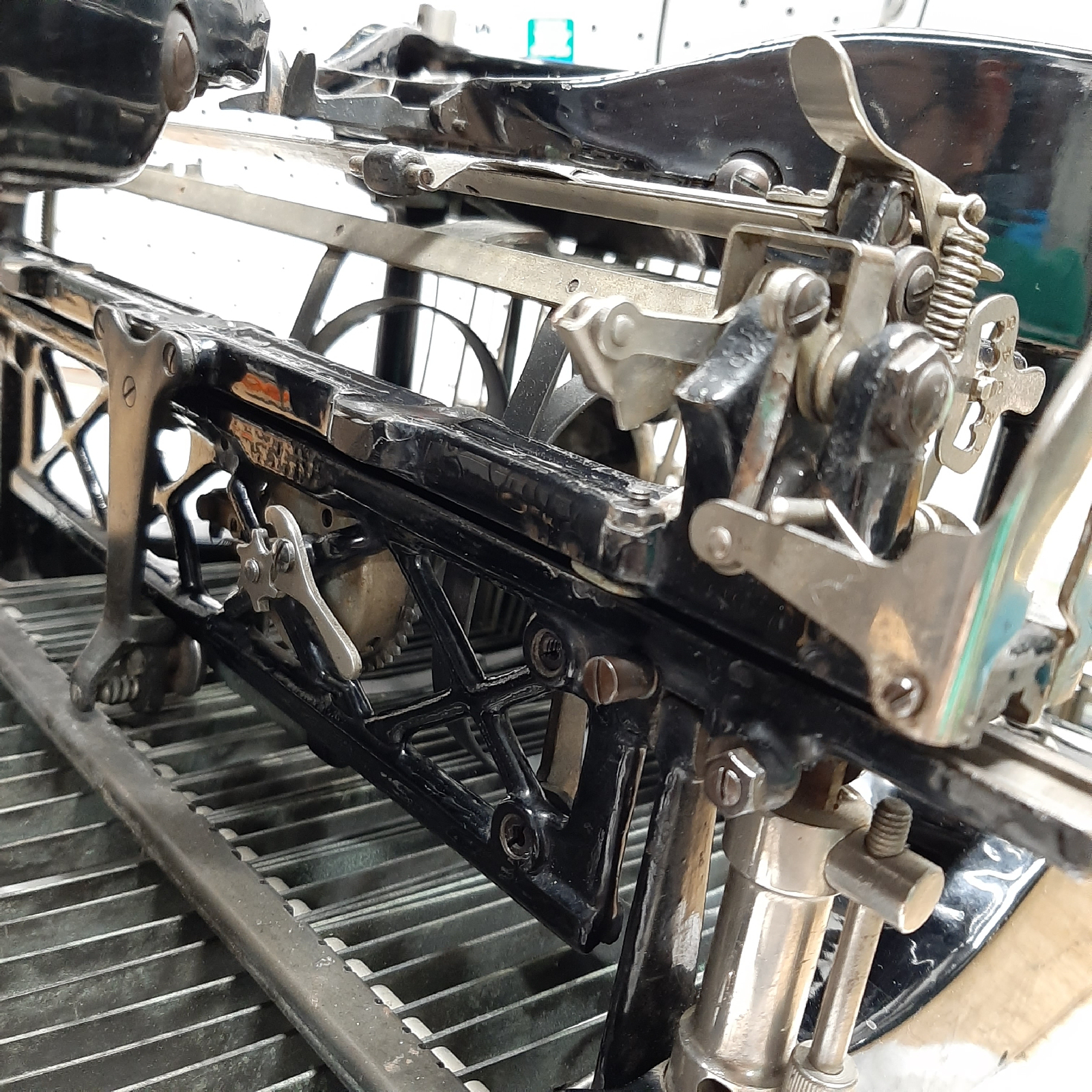 Polished inside and out 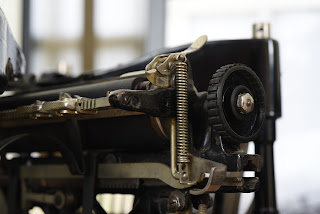 And there is that printed knob
The base on the other hand was in poor shape.  The veneer was a gonner, so I ended up having to scrape it all off, sand the wood, and finish it with some furniture oil.  The bottom part of the board got felt coated.  What was a relatively simple project took quite a while, as I had to wait on the 1905 to arrive to measure some of the parts.  That took about a month, but all ended well. 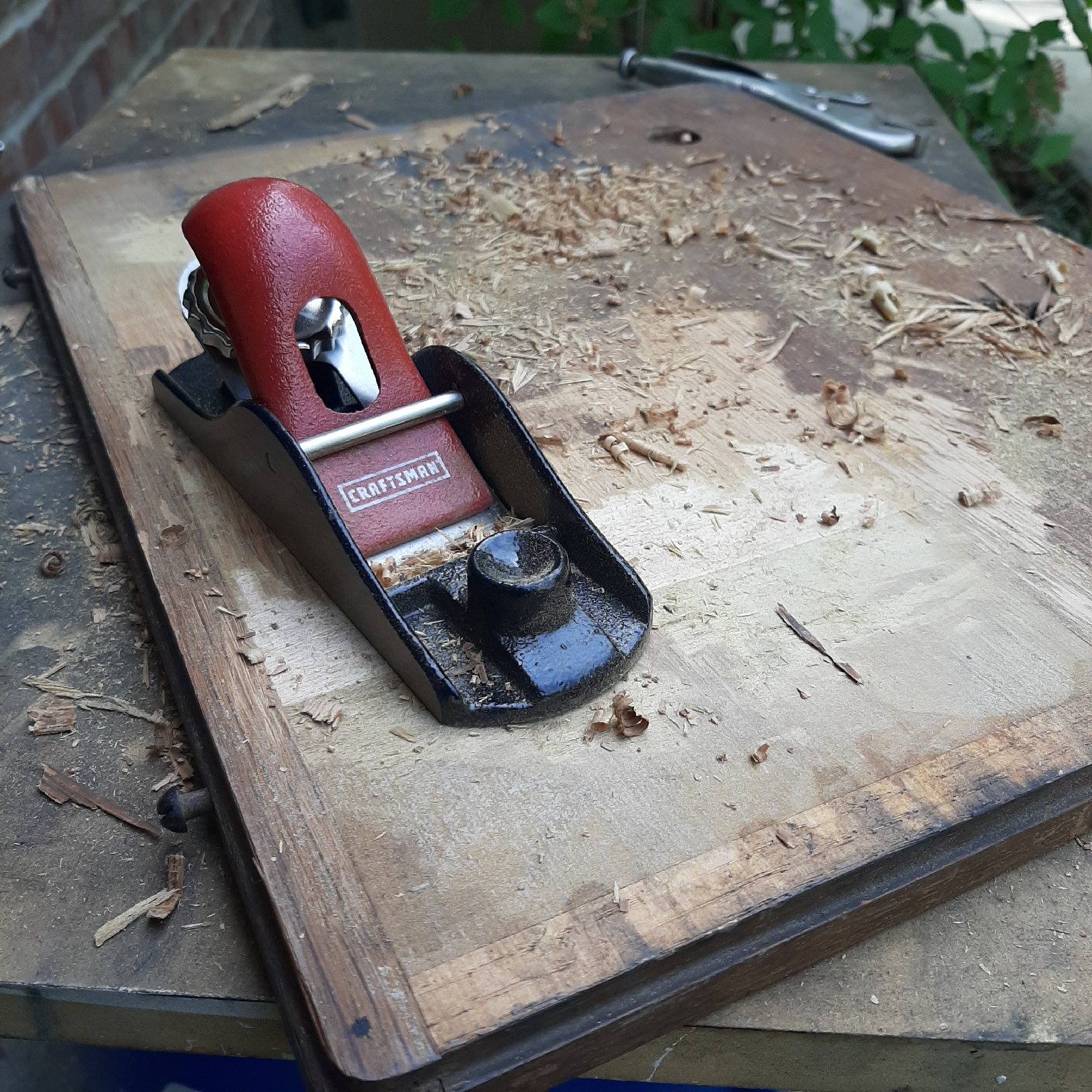 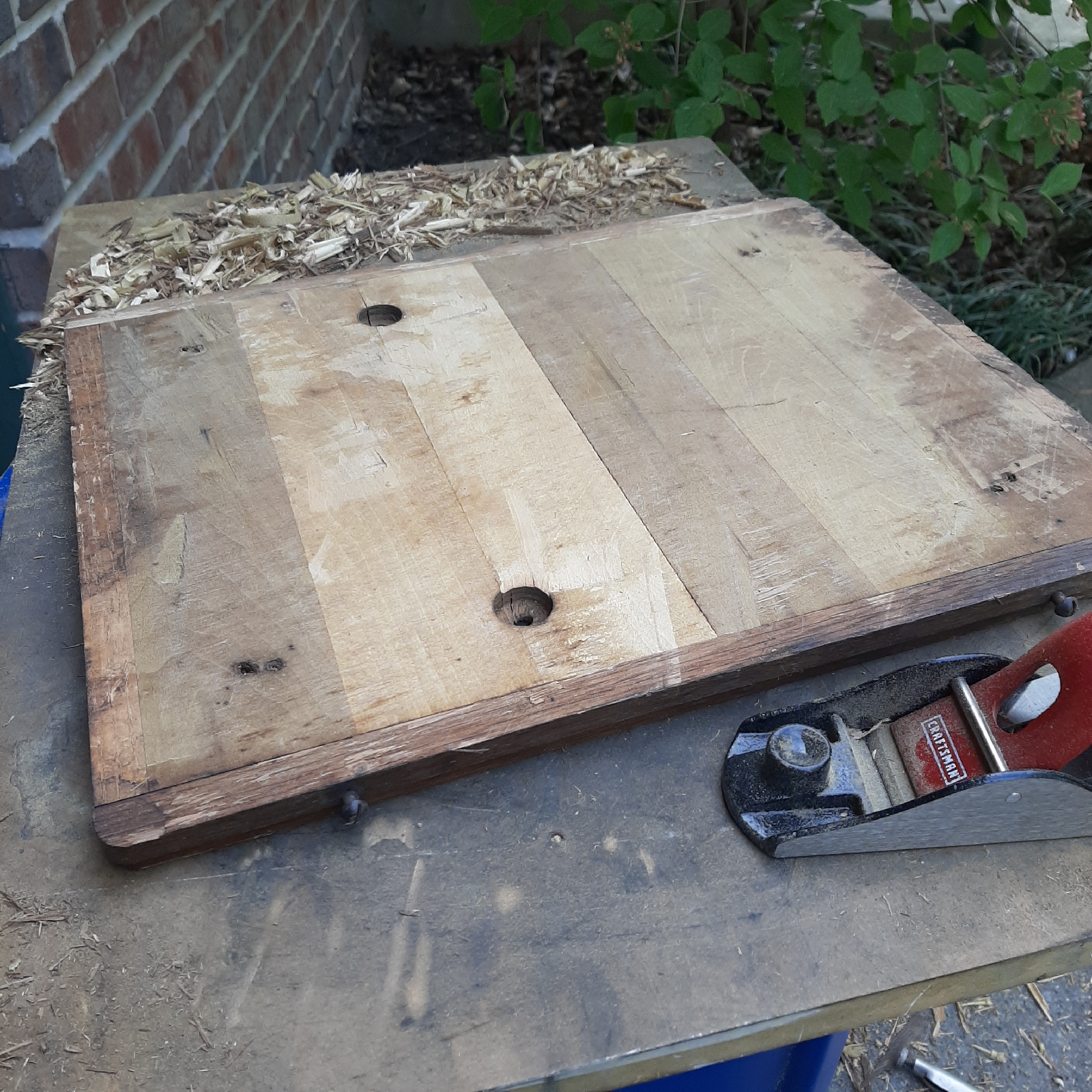 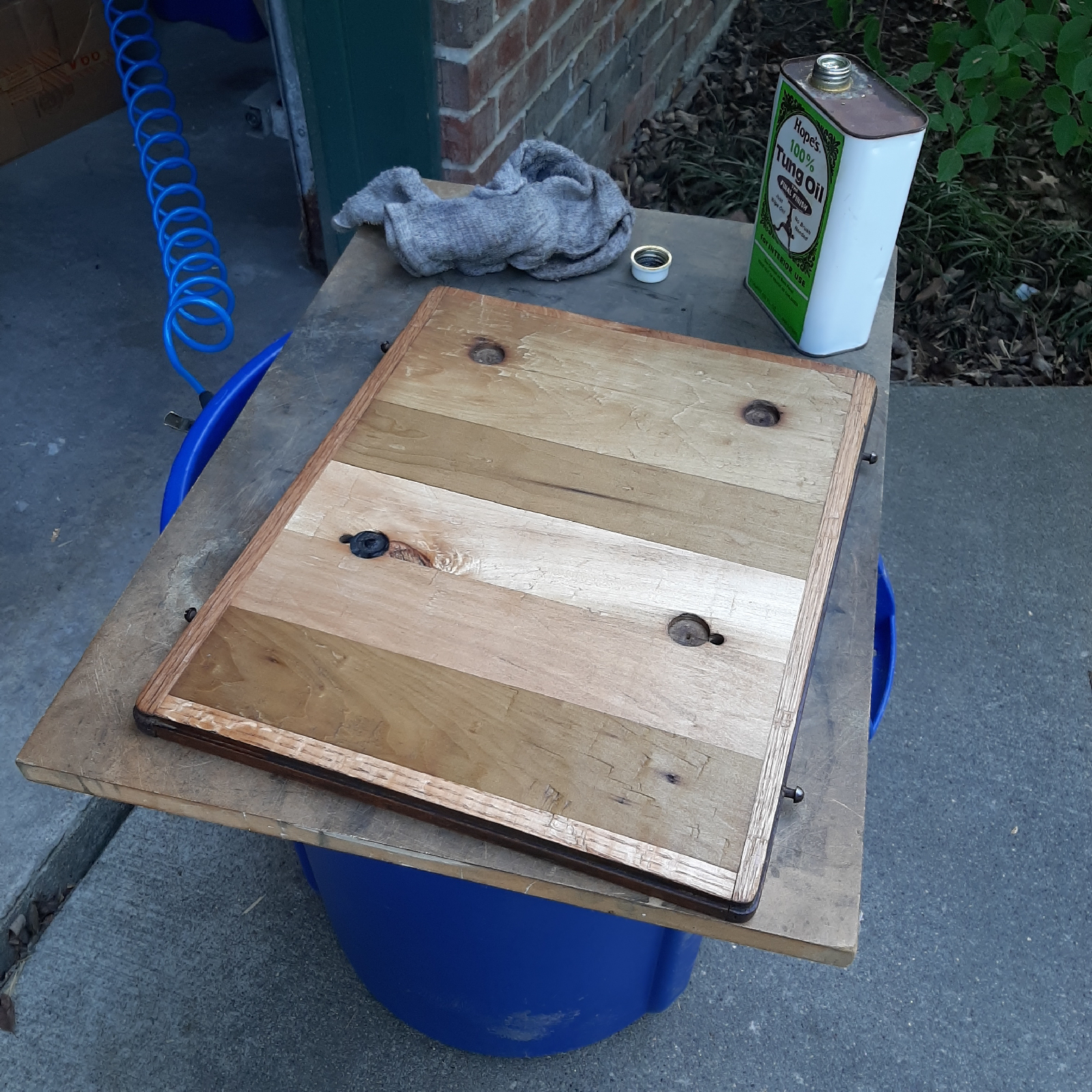 Once the base was done, I grabbed some spare bolts and bolted the machine down to it, making sure to have a rubber bushing between the frame and base on the right side to even out for the loss of foot.  Once that was complete, the machine was done, and wow is it beautiful. 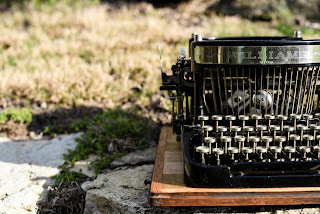 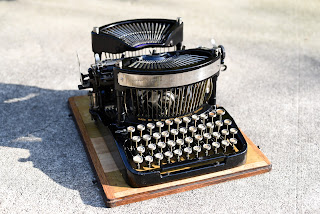 The 1905 model 4 came in much worse condition, though it had a decent base and the top case half (which was nice to have).  The two ball bearings were missing, the escapement bracket was bent, and it was all held together with a chopstick jammed in the rail.  It was also missing the rear frame panel which I was able to fabricate based off the measurements from the 1901 (and yes it looked like trash).  As of now I still intend to paint the thing. 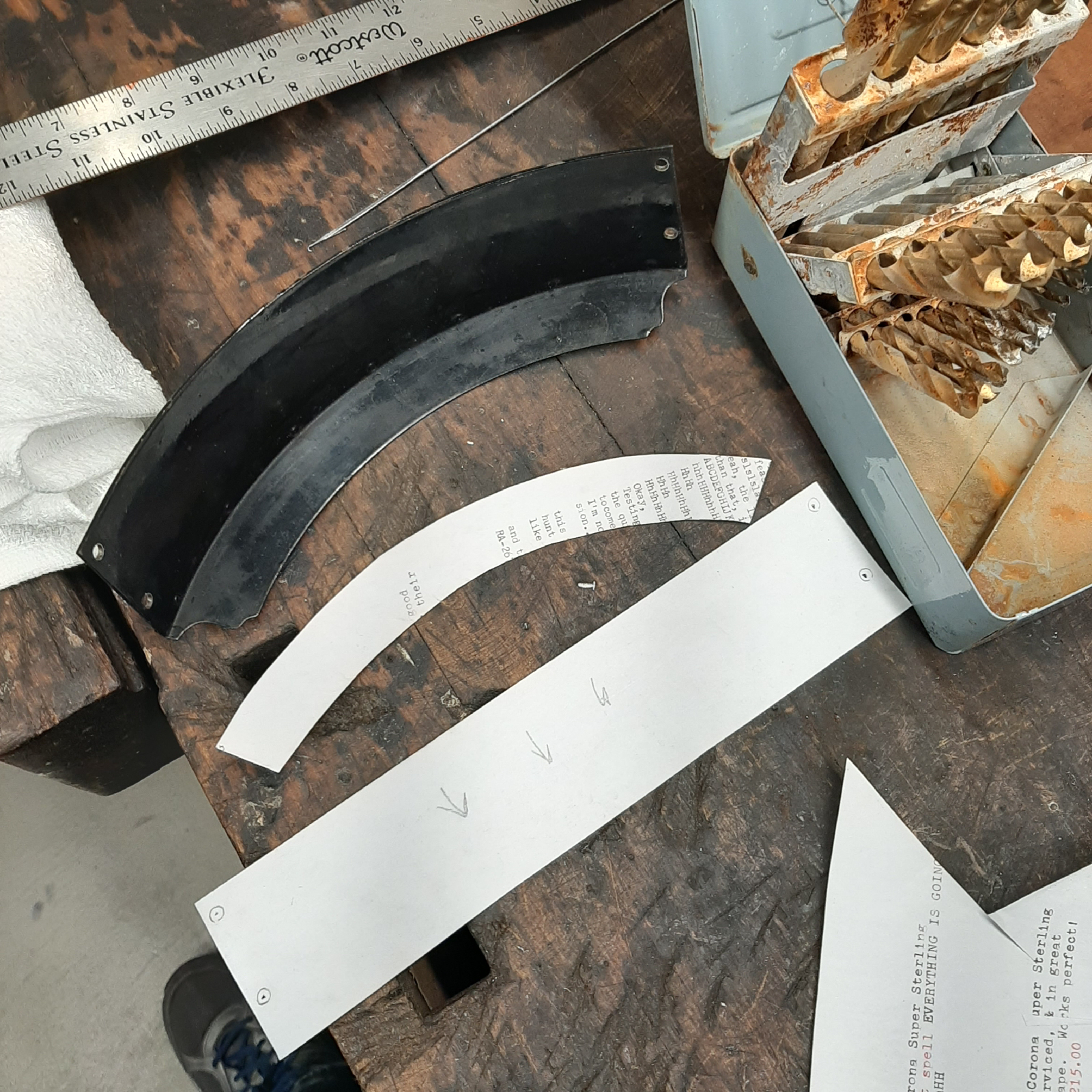 began first with a paper template 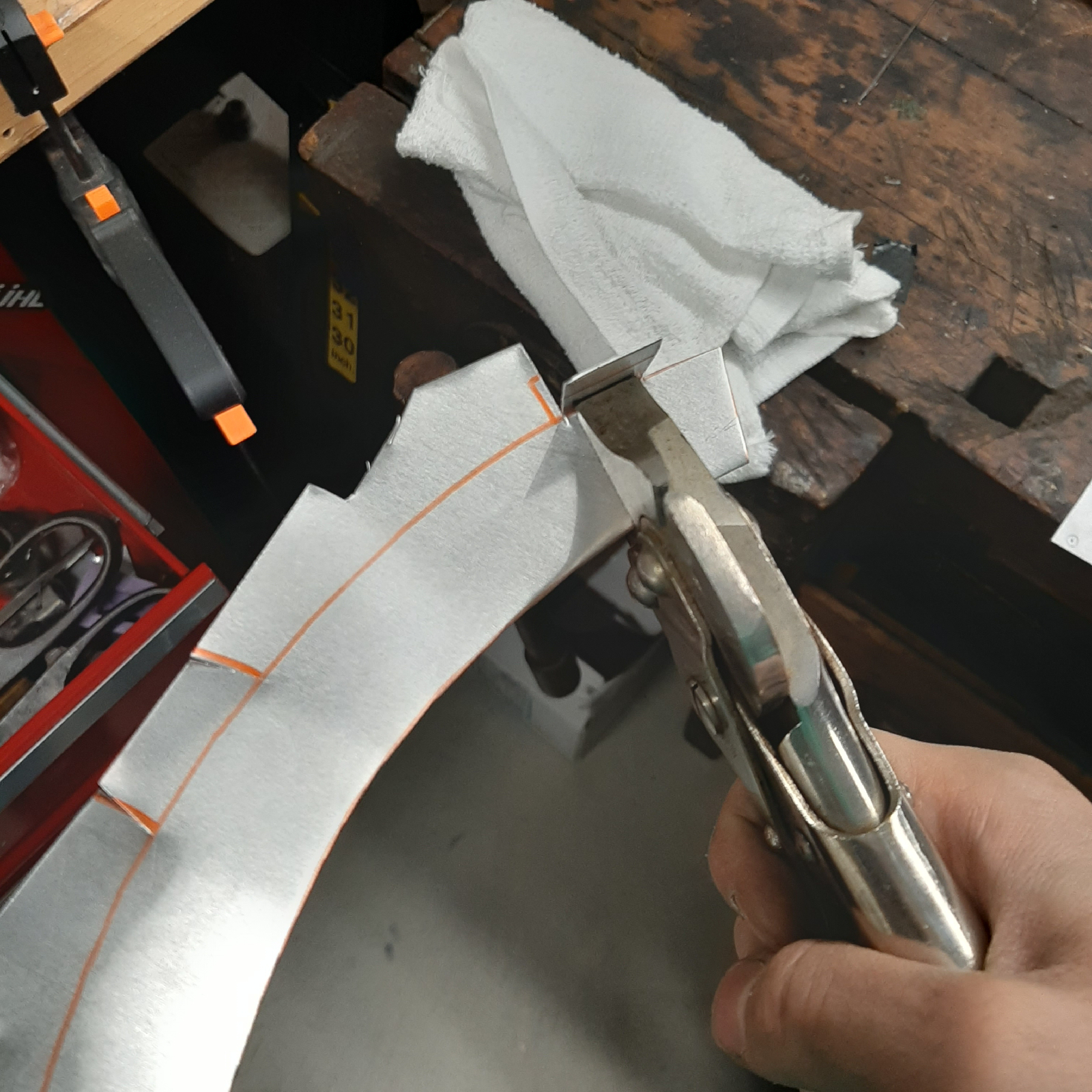 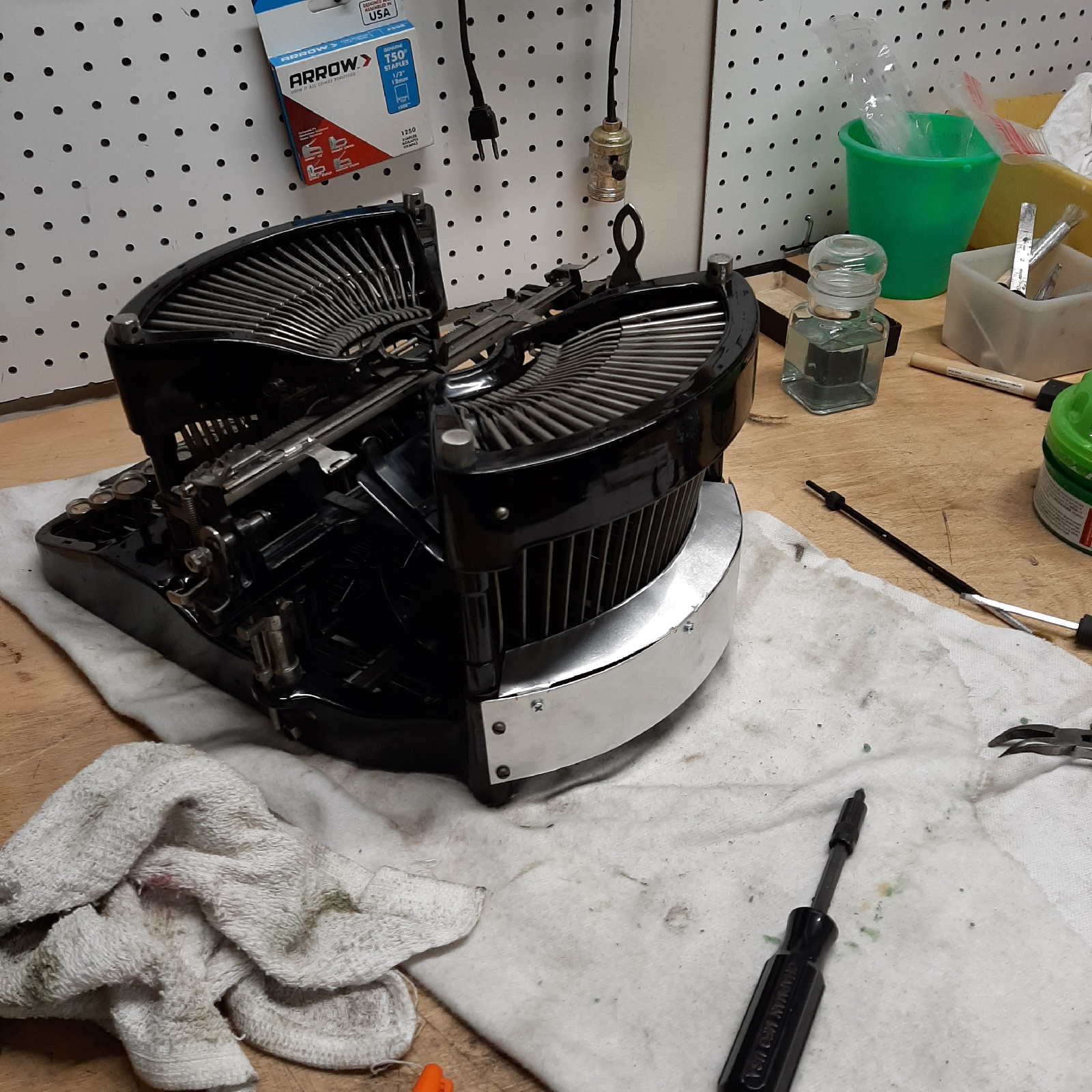 It also got a good inking, and some intense cleaning.  The ball bearings were the same size used for the model 1, and worked just fine without a bearing holder.  It wasn't too hard to unbend the escapement, but that mainspring really tears into the flesh if you let it slip.  Travel on the carriage was tight, but that can be loosened up with the side brackets that ride in a vertical chanel along the front of the bottom carriage rail. 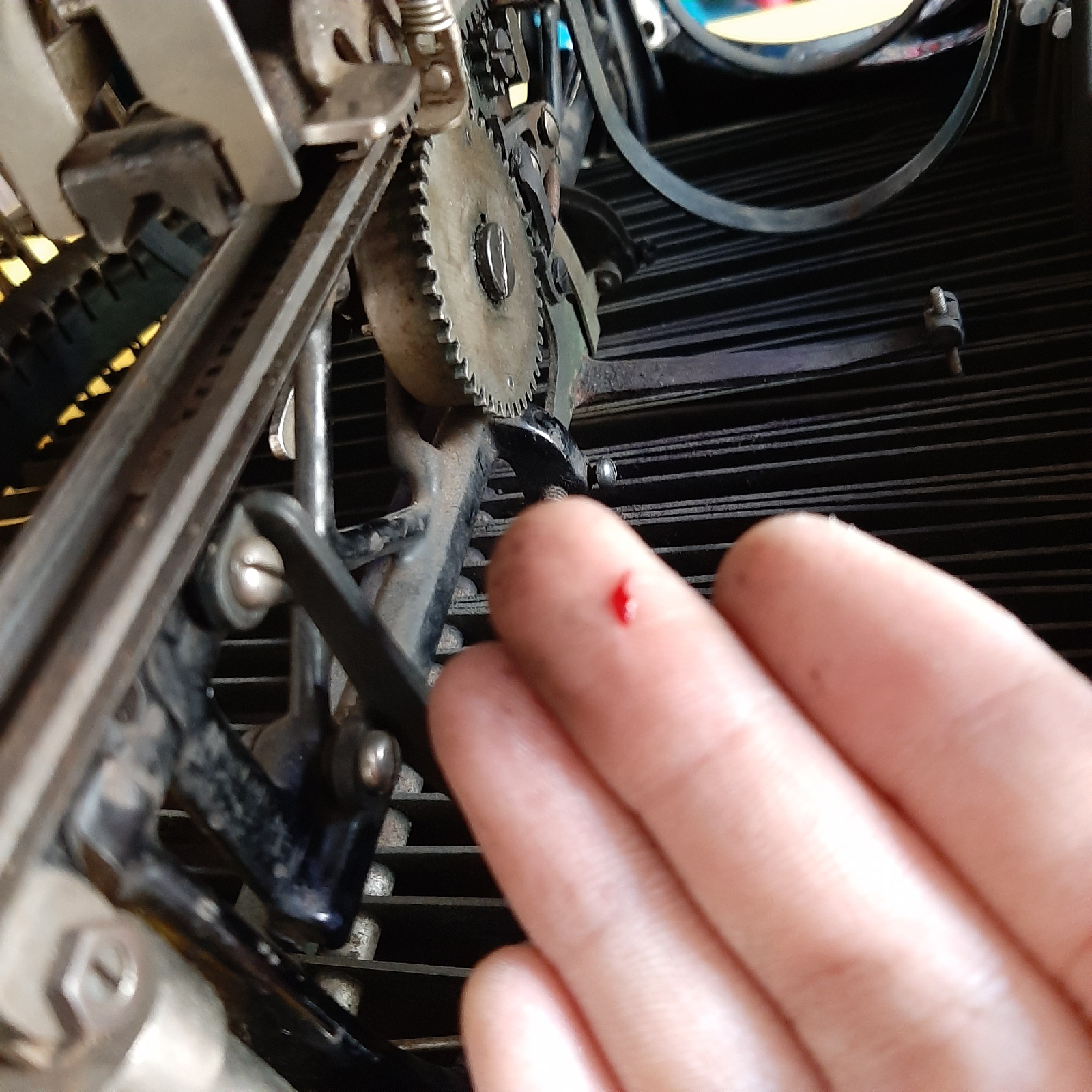 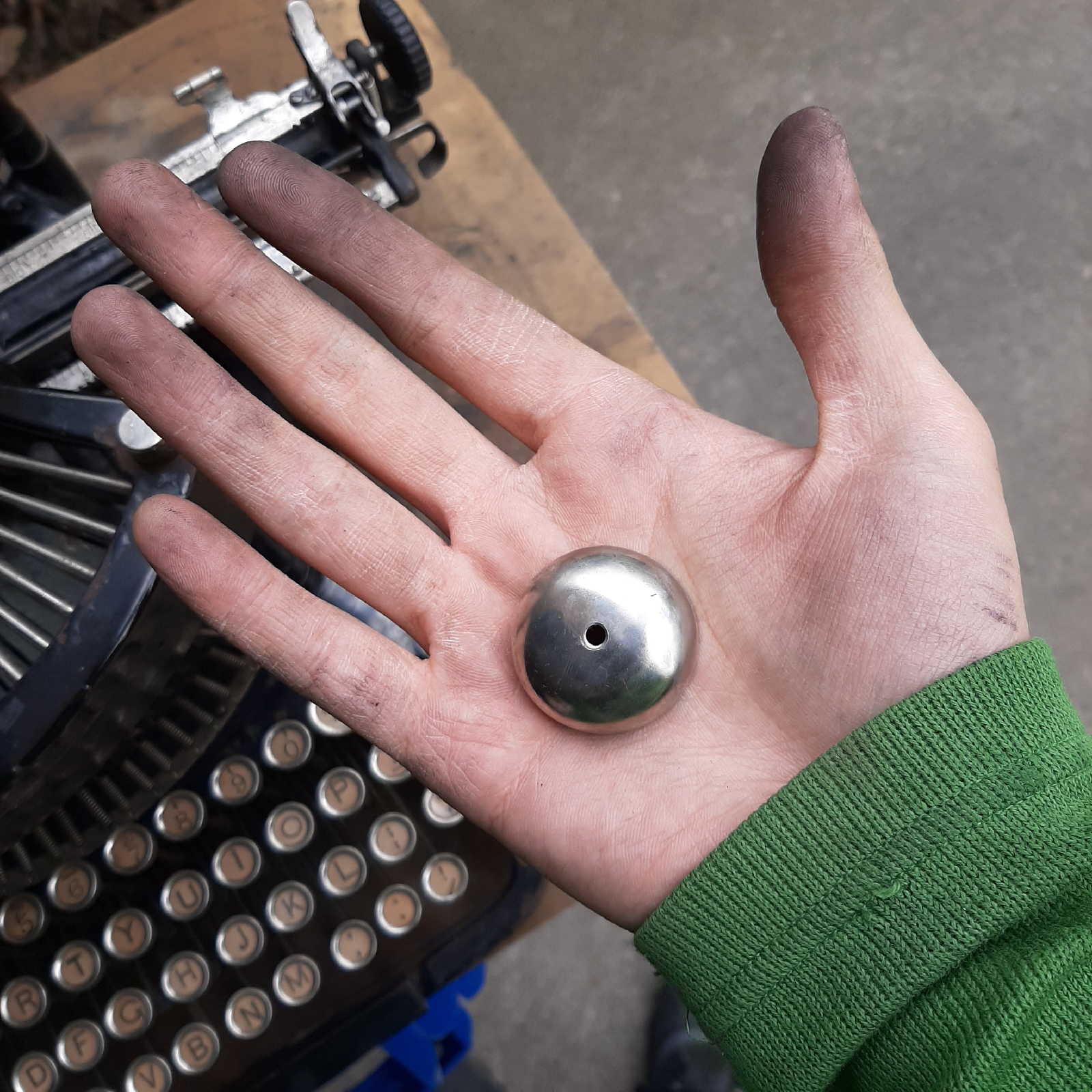 Once I was satisfied with the majority of the cleaning and adjustments, I put it all back together and inked up some pads.  These are super simple machines, so there really isn't much to do.  I left the original platen, and used heat shrink to redo the front feed roller.  Note that there are 8 little grips (six on the 1) that help hold the rubber in place.  These all need to be filed round if you want to put your own rubber on them. 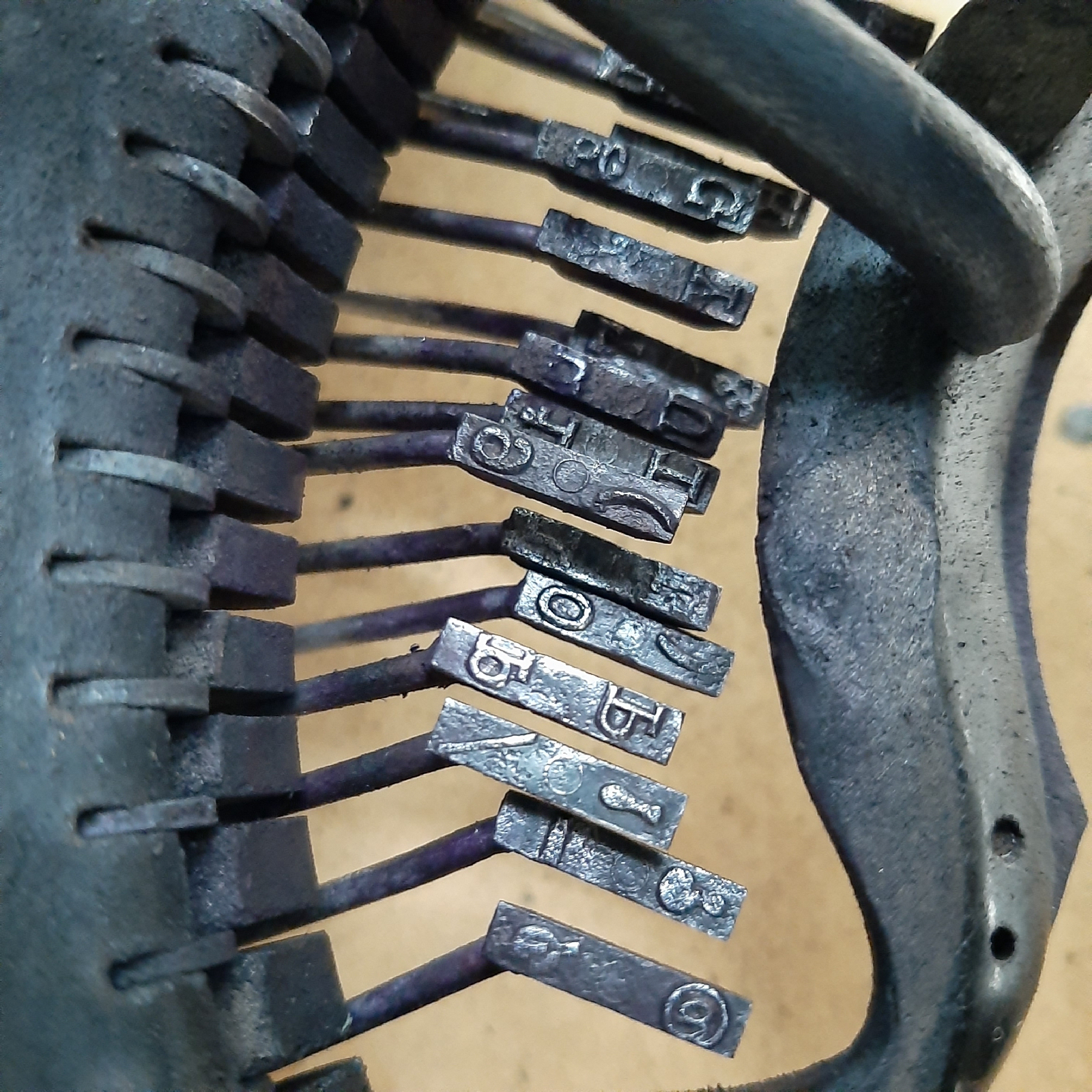 These slugs faired a little better, but not by much 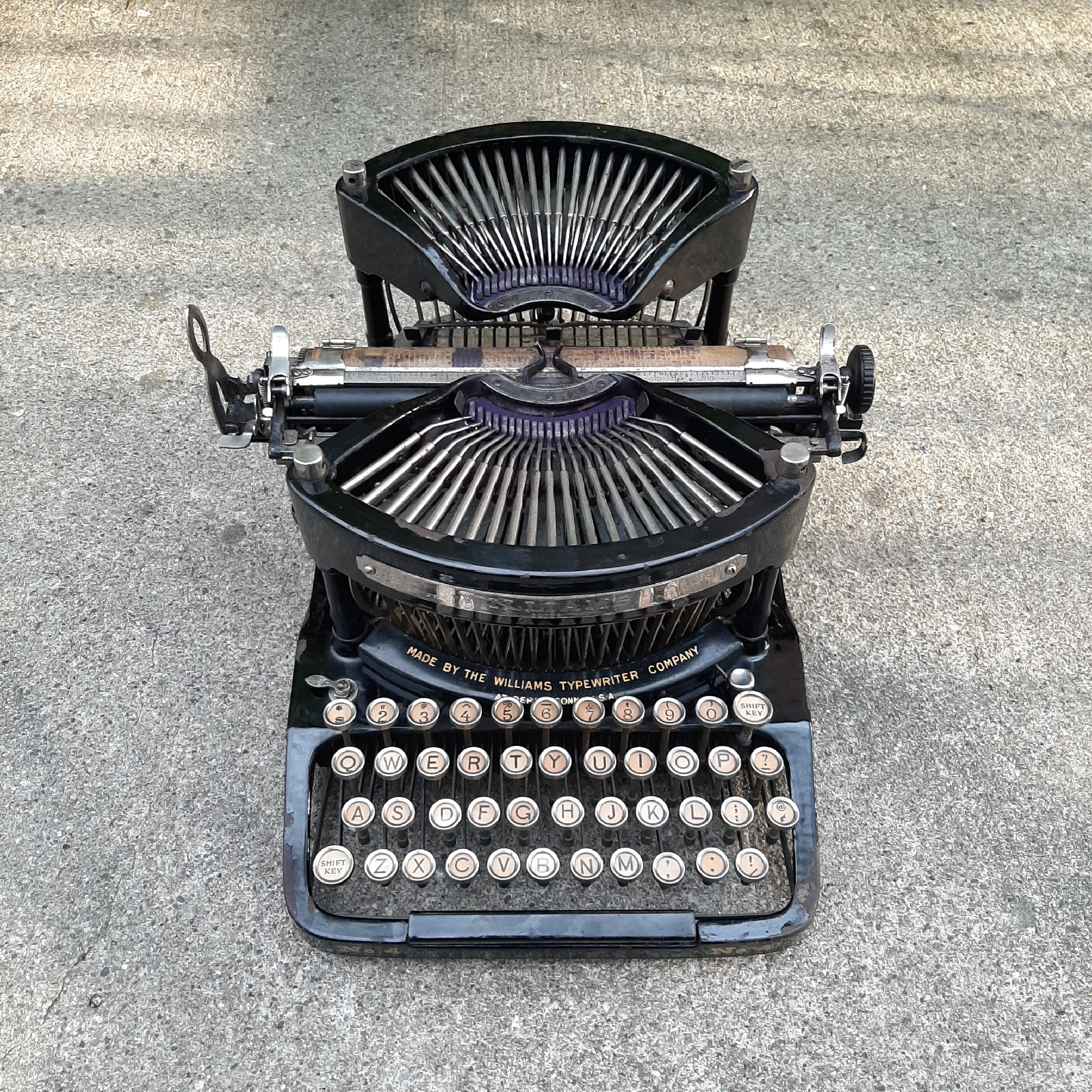 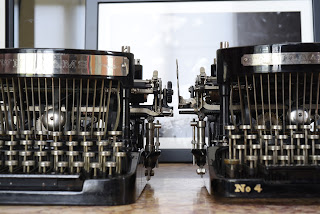 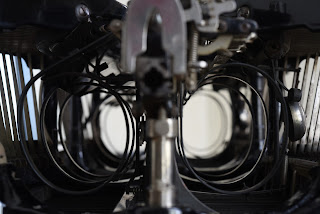 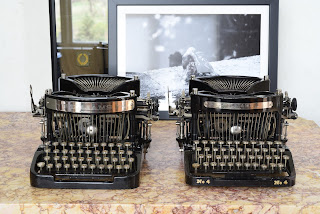 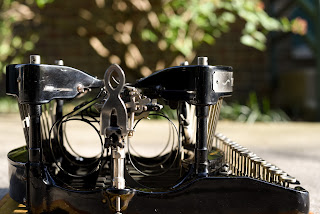 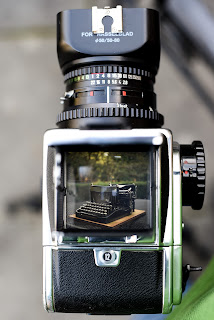 I'll have some nicer photos coming 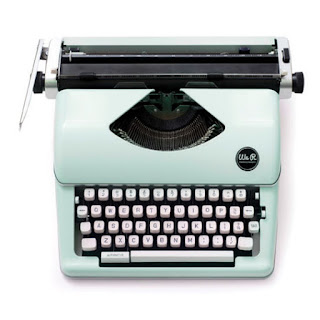 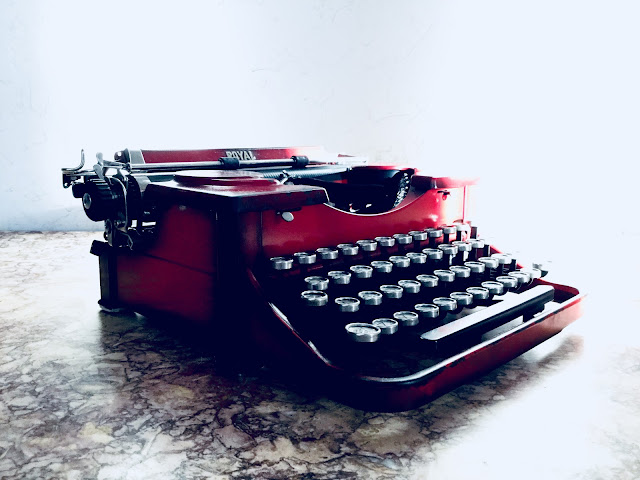 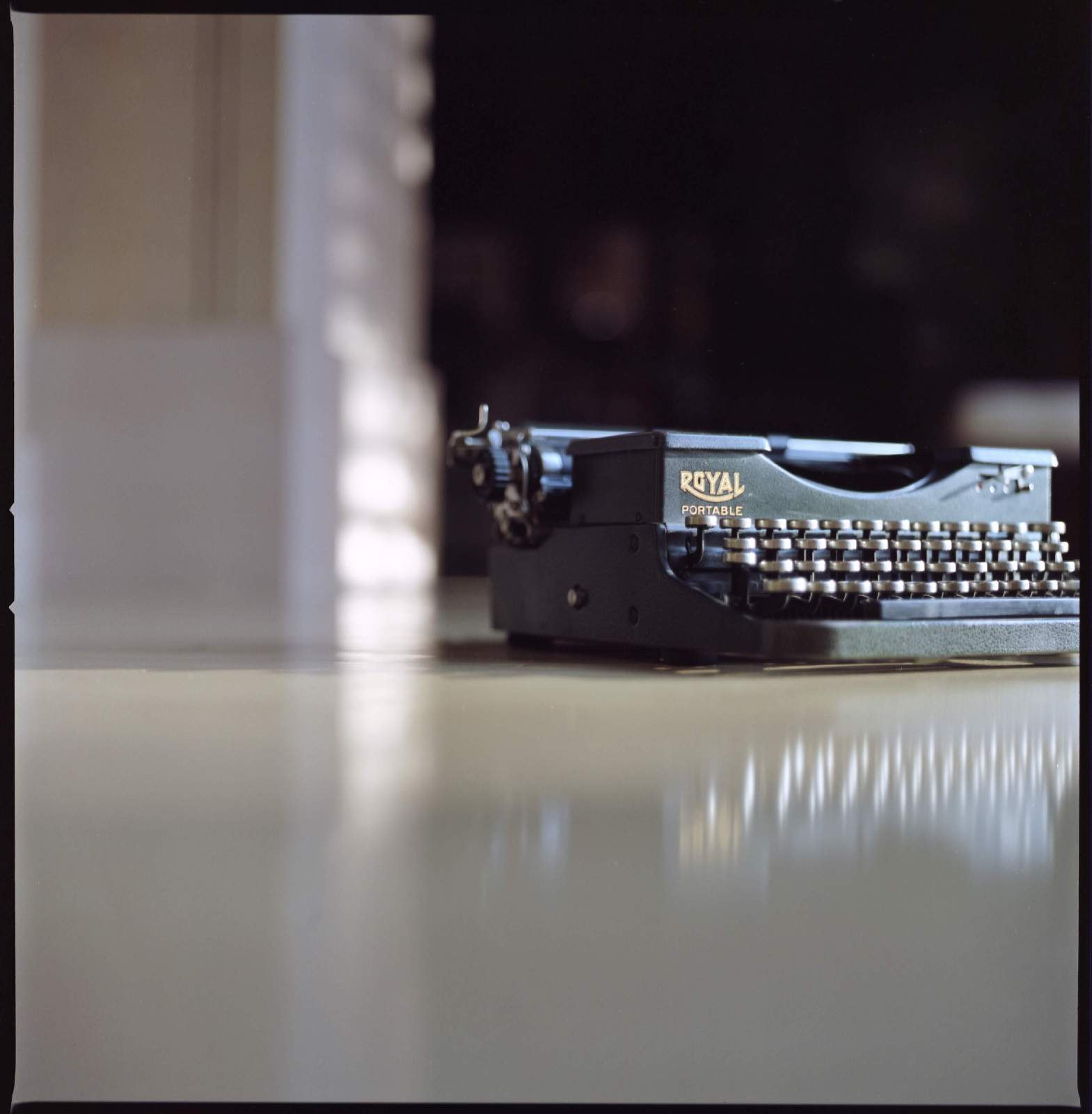