Showing posts from May, 2020
Show all 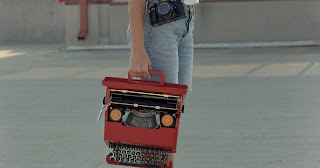 Kodak Color Plus 200 with the Nikon F3 Released on Valentine’s Day in 1969, the Olivetti Valentine has since been renown as an icon of contemporary industrial design.  The machine was designed in 1968 by Ettore Sottsass, an Italian designer from the Royal College of Art.  Ettore did something that had never been done to a typewriter before—he pushed it past the bounds of utility and into consumerism.  A worldview that now dominates today, but was relatively new in the early 1970s.  The typewriter suddenly became more of a statement piece than a working professional’s machine.  Art critics praised it as “the biro of typewriters,” and “the handbag machine,” highlighting its allure as a consumer item, a fashion statement, and a representation of a new era.  It was so well received that the Metropolitan Museum of Art in New York requested one for permanent display.  It remains the only typewriter on permanent exhibition there, as well as the only typewriter with a built in carryin
1 comment
Read more
More posts